According to the World Health Organization, the screening operation is defined as being a collective measure of public health, watchfully worked out so as to lead at identifying should the case occur, a disease or an anomaly yet ignored by persons considered as totally healthy till they passed through screening. Thus the early detection is an operation covering all of the population, people who can at random present a risky anomaly due to a hidden disease.

The aim of this cancer screening campaign is to identify premature cases prior to cancer development and even precancerous lesions at a curable stage, by using affordable and reliable screening tests presenting no danger and accepted by the largest number of persons. The outcome of these tests is to separate the healthy persons from those who could possibly be developing a cancer and who need more detailed examinations.

The early diagnosis consists in diagnosing cancer forerunners and first symptoms to ease the diagnosis before the malady is at an advanced stage, so that a lighter and more effective treatment can be applied. In other words, the aim of the early screening is to detect cancers at a curability stage to decrease their mortality rate by using means of diagnosis apt to cover the largest number of persons with a much less aggressive therapy.

The early detection is a very important prevention measure in the reduction of certain cancers’ incidence. Thanks to a battery of efficient programs of information, screening, early diagnosis and to the therapeutic care, the mortality rate and the proportion of people affected by cancer can be reduced by the third. 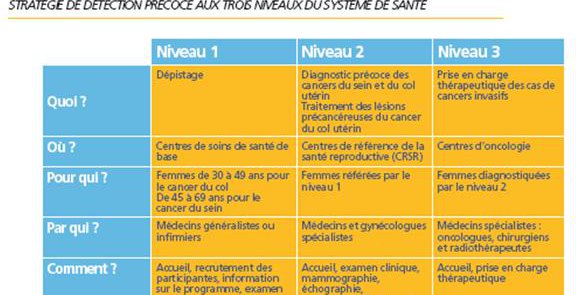 In Morocco, the National Cancer Prevention and Control Plan (NCPCP) set up as a strategic priority the early detection of the breast and cervix cancers.

To be effective, the activities of early detection of the breast and cervix cancers must be integrated into the national health system, which is split in three levels of intervention: