The breast cancer is very frequent, and is at the top of the list for the cancers that still kill too many women worldwide.

In spite of the research progress which dissected the development mechanisms of most cancers, the causes of the breast cancer are not that well known up to date. Nevertheless the different studies brought to light some risk factors that could favor the breast cancer, and how to reduce this risk by adopting a healthy lifestyle. 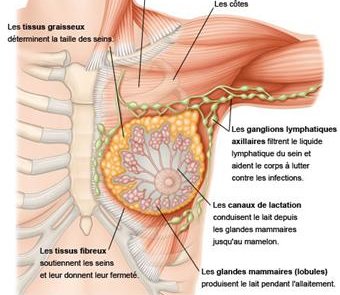 • The critical period is between 45 and 75 years old. As in most cases of chronic diseases, the risk of developing a breast cancer does increase while growing in age.

• Family or genetic factors: precedents of breast cancer in the family, mainly on the mother's side (grandmother, mother, aunt or sister)

• Overweight or obesity after menopause, as only 20 kilos more are enough to double the risk of developing a breast cancer

• Contraceptive pill. Studies proved that the use without prescription nor medical survey of certain oral contraceptives slightly increases the risk of developing a breast cancer for women on the pill for more than 4 years.

• Exposure to carcinogenic chemicals. The fact of being in touch with the chemicals present in the environment (organochloride pesticides DDT, parabens, etc.) could be a pattern for breast cancer, though the causal link is still not clearly identified.

A healthy-living routine (physical exercise, a sound food including enough vegetables and fruits, quitting smoking, etc.) as well as the preservation of a reasonable weight, all these factors seem to contribute in reducing the risk of most cancers among which the breast cancer.

Breast self examination is recommended, and should be carefully done at least once a month:

- Around one week after period, the perfect time during the menstrual cycle when the bosoms are neither sensitive, nor inflated

- The first day of the month for the post-menopausal women.

If an anomaly is detected while proceeding to the breast self examination, it has to be immediately reported to the family doctor or to have it checked in the closest healthcare center as soon as possible.

The breast cancer appears mostly by a painless bump first, either in the bosom itself or in the armpit, the other warning signs possibly being:

• a bump or a swelling under the armpit;

• a modification in the bosoms’ size or shape;

• dimples or folds appearing in the skin, thickening or puckering of the skin also called "cottage cheese";

• a flushing, a swelling or an increasing heat in the affected breast;

• an inverted nipple, that means an upside-down nipple turned towards the inside of the bosom;

• a crust or a desquamation on the nipple.

Besides saving lives, the early diagnosis for the breast cancer can avoid mutilating surgeries such as the total ablation of the breast (mastectomy).

Up to date, the mammography is actually the most effective means to diagnose earlier breast cancers because it screens even small calcifications possibly being precancerous lesions or tumors not exceeding one centimeter and clinically undetectable. The diagnosis is exact in 90% of the cases, and can be completed by a mammary scan to assert the nature of the mammary cysts and to check dense bosoms. If needed, the diagnosis is concluded by biopsies.

The surgery is often the first step for cancer treatment as the act of surgery aims at removing the cancerous tumor. In case of breast cancer, it will be a mastectomy, which can be segmental (only a part of the breast is removed) or total (the entire breast is removed). Quasi systematically, a surgery of the armpit lymph nodes is added. Among other factors, the decision to practice a partial or a total mastectomy depends on the size of the tumor and its position in the breast. The preference of the woman is taken into account too.

The partial mastectomy is generally followed by radiotherapy in order to destroy the cancer cells possibly remaining in the breast and reduces the risk of a tumor reappearing.

In case of total mastectomy, the radiotherapy is not always necessary.

To treat cancers, the chemotherapy uses a certain kind of medicines called antineoplastic conscripts. For the breast cancer, chemotherapy is usually administered after the surgery, aiming at destroying the cancer cells which would have propagated from the main tumor. The choice of beginning or not chemotherapy depends on the evolution stage of the disease.